Headlines ranging from CNN to TMZ and Perez Hilton have declared that the petition with more than 100,000 signatures to deport Justin Bieber from the U.S. must be reviewed by the White House, suggesting that the White House can simply deport Mr. Bieber in one fell swoop.  While the White House website indicates that any petition with more than 100,000 signatures obtained within 30 days will get a response from the website, this in no way means that the Executive branch can deport Bieber because he has been arrested for driving under the influence and drag racing. First of all, Bieber has not been found guilty of any crimes and in the United States you are innocent until proven guilty (at least in theory).  As a matter of fact, Bieber pled not guilty to the pending DUI charge.  Second, Bieber entered the United States legally on an O1-B visa for artists of “extraordinary ability.” To be clear, such a visa does not mean the U.S. government endorses Bieber’s brand of music, but rather that he meets certain objective criteria within his industry.  As Bieber entered the United States lawfully, he has certain due process rights, albeit less than a U.S. citizen or a green card holder.  If Justin Bieber committed an offense that makes him deportable, then he would be placed in removal proceedings where an Immigration Judge would determine if he is in fact deportable, and, if so, whether there are any forms of relief from removal.  Under the Immigration and Nationality Act Section 237(a)(2)(B), only aliens “convicted of a violation of (or a conspiracy or attempt to violate) any law or regulation of a State, the United States, or a foreign country relating to a controlled substance…is deportable.” So even though Justin Bieber has admitted to illegal drug use, this by itself does not make him deportable. 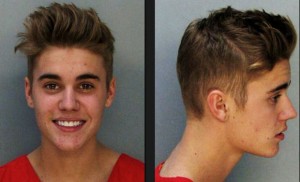 Where things get tricky for Bieber is that admitting to drug use does make you “inadmissibile.” Under the Immigration and Nationality Act Section 212(a)(2)(A)(i), which states, “Any alien convicted of, or who admits having committed, or who admits committing acts which constitute the essential elements of a violation of (or conspiracy or attempt to violate) any law or regulation of a State, the United States, or a foregin country relating to a controlled substance…is inadmissible.”  However, there is a waiver for this grounds of inadmissibility if the alien can show it is in the “national interest to do so.”  This is a discretionary waiver which is decided by the Department of State, or even the Attorney General.  Accordingly, “We the People” would be better off petitioning for Bieber to be denied admission to the United States, an option actually within the purview of the Executive branch rather than petitioning for his deportation (or more accurately, his removal from the United States).

No comments to show.